Michele Kang is turning heads in the professional soccer world due to her becoming part of the ownership group for the Washington Spirit, but has been in an ongoing battle to purchase the club.

She has reportedly offered to buy the club for $35 million which has exceeded previous offers. Majority owner Steve Baldwin and club founder Bill Lynch, have been pursuing to sell the franchise to Todd Bohely, the Los Angeles Dodgers, Lakers and Sparks co-owner, who offered $25 million. Supposedly, Baldwin and Lynch have yet to make a decision to sell to Kang even with a February 1st deadline. Kang has also reportedly acquired 52% of the club’s majority control gaining the right to vote on governance matters, such as selling the club.

Why is there so much hesitation to sell a women’s soccer club to a woman? Kang is wanting to invest in the Washington Spirit and all the women who play for the club. She wants to take this toxic environment, supposedly created by Baldwin, and turn it around. The players have also made it clear that they want Kang to take ownership of the club. Kang is more than qualified with an extensive list of previous successful investments. She founded Cognosante in 2008 to challenge the current healthcare system in the United States and has become a trusted partner of federal and state agencies. She is a member of the Board of Governors for the American Red Cross, a member of the Board of Directors for the Northern Virginia Technology Council, a Trustee on the Boards of the Washington National Opera and the Norton Museum of Art, and a member of the Board of Directors for the Palm Beach Symphony Orchestra. She also earned a bachelor’s degree in economics from The University of Chicago and a masters degree in public and private management from Yale School of Management.

When I met the team after the World Cup, I knew I wanted to help lead this club. I believe it is essential for successful women to take the lead in advancing other women, and I look forward to doing so for the women of the Washington Spirit. We are going to win on the field and off the field and I’m delighted to join our players, staff and my ownership partners in the pursuit of excellence.

It seems that a man considering to take a significantly lower offer from another man is being done merely out of spite to Kang who is offering much more.

Below is Kang’s letter to the NWSL Board of Governors… 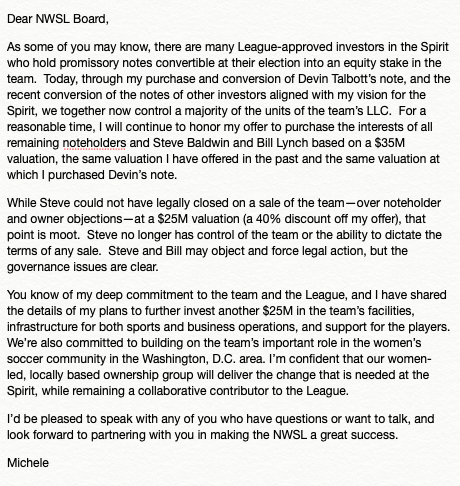 Kang is not giving up on this pursuit. With the possibility of legal action from Baldwin and Lynch down the line, Kang is ready to also take action if they decide to not move forward with her. As the 2022 season gets started, this could quite possibly be yet another incident in the NWSL that is prohibiting women from moving up in the world of sports.