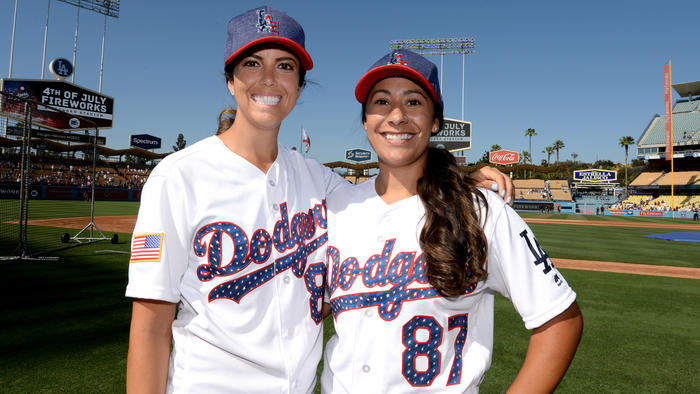 Our first Babe of the Week is a special one.

You can find them robbing fans of line drives on the baselines at Dodger Stadium. Amy Moore and Christina Zambrana, both former college softball players and current ballgirls for the Los Angeles Dodgers, are flat out studs. (Confession: I once got a little tipsy at a Dodgers game and very obnoxiously cheered on the ballgirls between innings for maybe 3 innings straight. Whatever, I hope they heard me.) Their quick grabs and incredible arms make Moore and Zambrana queens of Chavez Ravine.

This Sunday, they will make their return to the field (and postseason debut) after surviving the Las Vegas mass shooting on October 1.

The two attended the festival together and hid under a tent after shots flew into the crowd of 22,000. After Moore lost her shoes, Zambrana threw Moore on her back and carried her through the crowd and to a safer spot. Once they found a safe zone, the girls provided aid and comfort to injured concertgoers nearby.

Luckily, they survived and will undoubtedly be the two most resilient players in Dodgers uniforms at this Sunday’s home game in Los Angeles.

Survivors. Ballplayers. A tip of the cap to you both. Thank you for being strong, compassionate, and an inspiration.

For a more in depth feature, check out this LA Times article.

Sending love to all affected by the tragedy in Las Vegas.

Another big move from a rapidly growing league! 🤑
The FIBA Women’s Basketball World Cup is underway and Brittney Griner’s absence from Team USA is LOUD.
Congratulations to Becky Hammon and the Las Vegas Aces for winning their first WNBA championship title!!
Surfing greatness! Stephanie Gilmore wins her record breaking 8th world surfing title at the World Surf League finals in California. Righteous 🤙🏼😍
Congratulations to basketball legend, Lindsay Whalen, as she was inducted into the Naismith Hall of Fame over the weekend. Whalen finished her career with the Minnesota Lynx as a five-time All-Star, a four-time WNBA champion, a two-time Olympic gold medalist and the WNBA's all-time leader in assists. In her speech, she also credited Burger King for continuing her basketball journey. Mood.
Iga proved why she is number 1 over the weekend 🤩🤩🤩