In honor of the 26th anniversary of Derek Jeter being drafted to the Yankees, I am repurposing this post I wrote the night he retired from baseball, including up to date commentary! 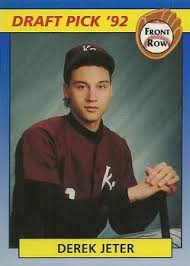 When Derek Jeter was first introduced to baseball fans, I was a newly turned 7-year-old living just outside of New York City in a Jersey suburb. My dad grew up a Yankee fan, idolizing DiMaggio and Mantle, so obviously my team was chosen for me before I even knew what baseball was. I don’t remember my first baseball game – I’ve rooted for the Yankees for as long as I can remember. For more than half my life, Jeter was shortstop for my favorite team.

My love for Jeter has gone through many stages over the years. When I was a kid, he was simply the new shortstop who helped the Yankees dominate the late 90s. Somewhere around the turn of my first decade, I was at a game with my dad and from the upper deck, I watched Jeter make a show stopping play and something clicked in my head: I was in love.

This marks the beginning of what might’ve been an unhealthy obsession with Derek Jeter. Like lots of girls my age, I wanted to grow up and marry him because I clearly had and still have realistic life expectations. I learned everything about him. It didn’t help that I was going through Middle School and blossoming into a boy crazed pre-teen. I read his biography, “The Life You Imagine”, I memorized mundane facts, like his family’s names, his favorite foods, the fact he was named after a hockey player, even his hat size. His hat size! When in my life will I ever need to know that Derek Jeter wears a 7 ¼ size hat? *Never. I guess I was an incredibly bored kid and had a lot of time to memorize all of this information, most of which I still remember to this day. I never memorized statistics because any normal fan can memorize stats. I was his future wife! I needed to know deeper, personal details – duh. When he hosted SNL in 2001, I recorded it on VHS and re-watched so many times that I can still recite every line from every sketch he was in. “He looks like if the Rock had sex with a muppet.” Classic. (Sidenote: Musical guests were Shakira ad BubbaSparxx. Simpler times, people.) My room was filled with Jeter posters and newspaper covers. One year for Christmas, I got a life-size Jeter cardboard cutout that still stands in the corner of my childhood bedroom because I can’t stand to part with it. *Even when my mother sold my childhood home, I couldn’t bear to part with it. I started a Jeter scrapbook full of headlines and articles to show my future grandkids. I have a vivid memory of one time when a friend tore up a poster of Jeter in front of me and I cried. I CRIED.

Oh, so many tears have been shed over numba two. Before a game at Yankee Stadium once, I stood along the first baseline where he warms up and could’ve SWORN he looked over at me. We made eye contact. In a sea of thousands of fans, his eyes found mine… I’m pretty sure. Anyway, I cried. (My dad witnessed this and still teases me about it). When my sister met him in a bar in Manhattan, I was so jealous, I cried. It just wasn’t fair!! How dare she be a hip adult while I sit, underage, in my friend’s basement watching The Incredibles. Then, the next day, when she gave me a bar napkin with his autograph made out to me, I cried again. (She still makes fun of me for this as well). I’ve given my sister a lot over the years, but I will forever be indebted to her for a bar napkin.

It was somewhere in the mid-2000s when I entered the next stage of my Jeter obsession. I was finally growing more mature. I started accepting the fact I may not marry Derek after all, and I was okay with it (I guess, whatever). I remember taking one of many tours of the old Yankee Stadium when I overheard a guy pointing out a spot in the dugout to his young son. “That’s where Derek Jeter sits”. I was so blinded by my obsession that I didn’t even stop to realize that outside of my own mind, Jeter was becoming something of a New York legend. My dad always raved about what a legend Mantle was, and now here I am, experiencing the Mickey Mantle of my generation! (minus the rampant alcoholism…).

I like to think that this was the point I joined the rest of the sane people who admired Jeter in a healthy, Yankee-fan kind of way. You know, normal. Once you recognize how rare a player like Jeter is, your appreciation shifts. There’s been enough talk about it over the past year so I’m not going to get into that. I understand people get fed up. There are non-Jeter fans out there, like my Phillies fan fiance – *and now, Miami Marlins fans – who has rolled his eyes every time anything revolving around Jeter has come on television or into conversation. I get it. And sure, we could argue about his career and whether or not he’s the best shortstop ever, but that’s not what I’m trying to get into here.

His last home game in the Bronx was rough for all Jeter fans. I stayed late at work in fear of missing out on any precious moments while driving home so I watched it on my computer with tears in my eyes for the last three innings straight and sobbed like a baby when it ended. Every time the camera cut to Derek’s family I thought to myself, “Oh, there’s his mom, Dorothy, and his sister Sharlee. And of course Dr. Charles Jeter, too.” Laughing at myself as I thought about the 13-year-old version of me. My dad called me as soon as the game was over to make sure I was okay and, like it typically does, our conversation shifted back to baseball and as we shared our predictions for this year’s World Series matchup.  *I was wrong

If you know me at all, you know I couldn’t not say something about Derek Jeter before this was all over. My Jeter obsession has become something like an extension of my personality. People who knew me in high school jokingly texted me recently to say they’ve been thinking of me as all the Jeter hype winds down. My fiance tried to keep my feet on the ground when I start gushing over Jeter but I refuse. “Just let it happen!” I yell.

And, well, I guess that’s it. He’s always been there and now he won’t be. Someone else will have to play shortstop next year and frankly I feel kinda bad for that guy. *LOL cut to 2018 and Didi. Whether it’s Stephen Drew or Troy Tulowitzki, – *Wow, was I off or what – their performance will never compare. I’m pretty excited to dust off that old scrapbook I started when I was a kid and tell my children all about the Derek Jeter era. Maybe they’ll even ask me what his hat size was. *No, they won’t.

You can say this is ‘peak’ babery… 😏
She’s not a businessbabe, she’s a BUSINESS, babe. 😉
One of the most important tournaments on the LPGA schedule tees off tomorrow and defending champ Jin Young Ko is expected to take home all the marbles.
“The Swimsuit issue for so many years has been iconic and has represented for a lot of women. Now you are seeing an evolution in what that can mean and what that can look like, and I think WNBA players being a part of that is what makes it special.” - Sue Bird
GO OFF SIS 🤑🤑🤑
After a sold out crowd watched the first women’s boxing match to ever headline at Madison Square Garden on Saturday, boxer Amanda Serrano had some babe-worthy words.