During opening week, the Mets-Phillies game was streamed live exclusively on Facebook. It’s the first time a U.S. league has done this and it made everyone over the age of thirty scratch their heads. They’re doing this for up to 25 games this season, including today’s Brewers-Cardinals game. 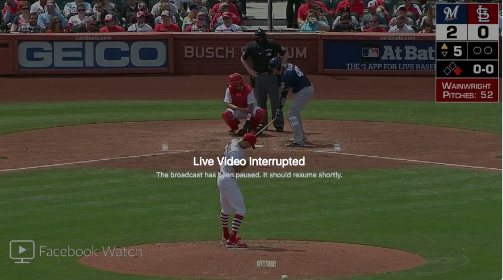 All of the Facebook Watch games will be afternoon games, so that those at work can get access to games when they otherwise wouldn’t be tuning in. The point is to get games on phones, tablets, laptops, etc. In short, to get more eyes on the games. They’ll still be produced by MLB Network so it’s not like you’re getting any lesser quality or coverage.

MLB is putting an awful lot of money and energy into getting people watching games and making said games as short as possible. It’s not that this new form of watching sports is good or bad. It simply… is. It’s evolution. It’s innovation. It’s strange. It’s scary. Especially if you work at ESPN.

ESPN has been trying to push a digital video launch wit Snapchat, but it’s not quite taking off with young viewers. In my opinion, they’re not really using their young, technically savvy on-air personalities to their full advantage. ESPN also don’t care about baseball half as much as they do football and basketball.

I personally don’t even have Facebook so I will not be tuning in. I also don’t complain about baseball being slow or boring because I genuinely love watching games. I don’t want to watch a baseball game on a social media platform. Using the words ‘social media platform’ makes me cringe. Facebook in general makes me cringe. And no, I am not 65 years old. I get why they are desperate to appeal to young viewers because they are the future. They have the older audience who grew up with baseball. They need to keep younger generations involved, interested and interactive.

If this move is right, it will prove itself right. If it’s the wrong move for live sports, it just won’t work and these 25 games will be failed experiment mentioned in Ken Burns’ 2050 documentary.